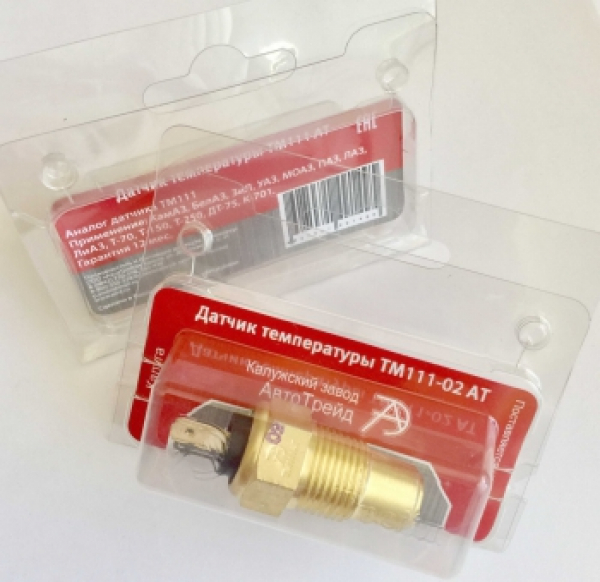 Use of a completely new design has increased the service life and reliability of electronic temperature sensor TM111-02 AT, i.e. increased thermal conductivity, the additional fault protection., Resource sensor is increased by 10 times. Confirmed by tests in independent laboratories.

Great impact on resource sensor material has electrical contacts. In the best of times they made of silver. Later they began to use copper tipped with silver (0.5 mm thick). Now more and more manufacturers use copper with silver-plated contacts. The thickness of the silver layer 20-20 microns. The electrical load on the sensor contacts - relay winding coil. The type of load - Inductive. At the time of closure and especially at the moment of opening of the contacts therebetween occurs spark (arc), breaking the surface contacts. Ultimately contacts or completely destroyed or fused, which also leads to the output of the sensor system.

Analysis of 150 pcs. TM111-02 type sensors require replacement on vehicles family GAS (obtained from service stations and around Moscow) showed that the main reason for their exit from the system - the degradation of bimetallic discs (72%). The life of the average type sensor TM111-02 is 1-1.5 years. Single copies "die" after a month of summer intensive use of the car.

To the delight of motorists and to the indignation of manufacturers of conventional type TM111-02 sensors "Autotrade" released on the market practically "eternal" sensor, while its price is even lower than that of the sensors produced by traditional technology.